Is it magical, or just mundane? 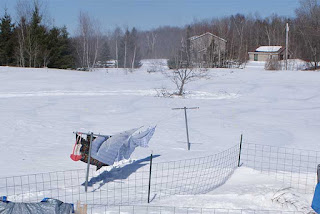 There has been much discussion coming across my awareness, of late, about magical and witchey practices, and I am being prompted to share more of my viewpoint and my practices.

It seems that many, newly come to the path, want to focus on holiday rituals, special tools and what you need to buy to "be a witch." It should not surprise me, I suppose. The culture we live in is built on commerce, big showy events and has been getting more so for years. But then there is this old witch, who pulled herself out of the common culture years before even considering this path consciously. The maxim of "use it up, wear it out, make it do or do without" caught me hard when I first encountered it, in the 70s, maybe because I have always identified with my peasant ancestors. Even as a youngster and young woman, when my peers dreamed princess dreams and sought twigs of nobility on their family trees, the stories I enjoyed most, from my heritage, were like those of a great grandmother, hitching herself to the plow alongside the draft beast, to help get the job done.

Add to this, the way I came to my path: in an off-grid community, led and instructed for years only by the inspiration of the cycles of the moon, the seasons, and whispered hints from Elementals. There were no "pagan stores" even when I went to town certainly not at my fingertips as I sat at my desk, let alone hiding in my pocket!

It was, as they say, literally a very "chop wood, carry water" existence and that informed my practice from the beginning.

As I raised my family off-grid, heating and cooking with wood and lighting with kerosene and candles, the kids often asked "how did they do it" whatever *it* was "in the old days?" And picking up my spiritual path as I did, I think this same mindset contributed.

In the very far past, I think, my foremothers needed, called on and used the collaboration with the unseen forces -- and likely the Gods as well -- on a daily basis. When you are living a life near the bottom of what we now call the Maslow hierarchy of needs -- when *survival* is the focus of all you do -- I think even the smallest hint that there might be some force beyond the physical existence that could be called on to help you would have been used on a daily basis. And in that mindset, many of my practices were born, informing and augmenting what otherwise were strictly mundane tasks.

Today I am thinking about laundry.

I do not just throw loads in the washer willy nilly through the week and then into the dryer, to be pick at until the next load comes along. I do not just *clean* the laundry, but instead cleanse it, with the power of earth, air, fire and water.

The water is self evident; some of the others less so. Earth comes from my laundry product, which is not a package of store-bought detergent (though I suppose a case could be made for it coming from the earth, as chemicals). Instead I use a product that I make from soap (animal far and lye are both very earthy), baking and washing soda, which come out of the ground in the form of minerals nahcolite and trona, which are refined into soda ash (a.k.a. washing soda or calcium carbonate), then turned into baking soda (a.k.a. sodium bicarbonate), and borax, also a mineral. How much earthier can you get!

The air and fire come into play in the drying cycle, but I do not use a 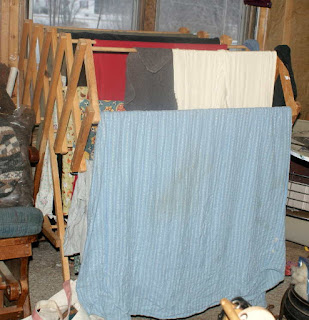 mechanical drier as you might have gathered from the photo heading this blog post. The fire in my laundry cycle is most often the sun, which provides heat even in winter (especially when combined with a good brisk wind). When we get a snowy week in winter, the hearth fire will suffice, and loads get hung on wooden racks inside.

The most important part of the process, though, is the INTENT. Kept in mind while loading the machine with the clothes and the washing powder, and while transferring them to the line or the rack, my desire to have the elements cleanse -- as well as clean -- the load is foremost in my mind. I picture any residual negative energies picked up along the way, being lifted from the fabric by the earth elements and going down the drain with the water. The nasty look or comment from a fellow shopper, or my own loss of temper at an unsafe driver encountered on a trip to town linger on what one was wearing, even if put out of mind. The "laundry ritual" not only takes care of those sort of things, but can wrap the garments in elemental blessings at the same time. And I do not think we can have too many blessings, too much support from the unseen worlds, certainly not in these times!

Blessings to you all.


Posted by DutchHexSign at 7:04 AM

The Feastlet of the First Eggs

This morning, after coming in from chores, I posted on Facebook


"Today we celebrate the Feastlet of the First New Eggs! I did get a second one from the ladies this morning, to go with yesterday's gift. This is quite early, as usually the first egg comes in early February, with the longer days. I think the open winter is confusing the hens. I am pretty sure they would not be fertile, as I have not heard the roosters having their way, nor the drakes with their hens either. But i shall boil mine (in heavily salted water, to help the peeling) and K's will be over easy, as he likes. They will go with potato patties, leftover 'taters from our garden. Livin' the witchy life in the country!"

I want to elaborate a bit on this, here, in response to a spate of recent activity in one of the groups I follow there. This group, for folks of my general spiritual persuasion,  has had a sudden influx, it seems of newcomers to the practices. They are all asking for guidance of some sort -- not unreasonably -- but their apparent single-minded focus on getting things "just right" for the full moon ritual just past, what one "should" and "should not" include at such a time, and especially what they need to purchase and where to find it has set my personal witchy hackles on end.


As an aside, let me remind my fearless readers that I came to my path led only by the world around me. The moon's and sun's cycles and movement, the inspiration offered by the plants, animals and elemental beings were my only instruction for years. Later there were books, people, online groups but in the beginning at least some of those resources had actually not been invented yet. When I did begin to encounter the tools of instruction that most folks take for granted these days, I checked the information I received against what I supposed should be called my own UPG (Unverified Personal Gnosis) but which was, and remains the backbone of my practice. New things that "felt right" were tried on for size and either melded in or put back by the wayside for the wanderer to whom they would apply.


So, I share this little ritual of thanks to the hens and acknowledgement of the turning of the year with the observation that, for me, the most meaningful rituals == the things that connect me most strongly with both the natural world and the Goddesses and Gods with whom I work == come to me this way. Organically.

And while it seems easier to sync with the natural world when it, and not the things of mankind, are what surround you, it is not necessary to move "beyond the sidewalks and off the grid" to connect. It is, however, necessary to change your assemblage point. How you will do that is variable, but let me suggest spending time outside your apartment and when you are outside, pay attention to: the weather -- wind and direction, temperature, dampness, the rain, the snow. Have you felt the moisture precipitate out of the air as you walk? If you live where it snows, do you know more than one word for the white stuff that falls? Look for "corn snow" and if you want to know more about kinds of snow, talk to someone who enjoys cross country skiing! Pay attention to the sky as well... learn the clouds, look for hints of the moon and the bright "star" or two you might see over the ambient light. Look around you at the street trees; talk to them, watch them change and listen to what they may tell you. Look for their short-lived annual friends that may spring up around them... both those that humans plant and especially the ones who volunteer to live in the cracks. While those specific individuals may not be safe, on account of exhaust and other contaminants, to use in teas and salves, if you learn them there, they will be greet you as friends when you visit the countryside, and offer some of their bounty for your use.

Listen to your intuition and learn to recognize when you are are "in the flow." Don't expect to *stay* there, as it, too is always changing. I imagine it as a benevolent whirlwind or waterspout, that may catch me up or whirl around me as I wander for a bit and then, following a different diversion or trail, flow off for a time, to be rejoined later.

So, with the blessing of the hens and the constant change of the seasons -- slowly moving through winter today with winds and rain which the weather guessers predict to turn to power-disrupting ice -- I leave you to your day. Mine will include cleaning the kitchen, decanting apple cider vinegar, mending and spinning once I repair a spinning wheel.

Blessings to all.
Posted by DutchHexSign at 9:10 AM