Tale of a Duck

You may never have wondered about what goes on here at DutchHexSign.com hex central under the sign of the Fussing Duck when there are no sign ordered to work on, but I can assure you life is never dull.

Here in Maine, the coming of spring is not only a much anticipated event, we get to anticipate it over and over, as late season snow falls creep into April on a regular basis. We had broad vistas of pasture and garden last week. And we will again in a day or so, once the approximately 8" of snow that fell over the course of 2 days early in the week, melts.

Despite the snow, the ducks stayed outside the poultry house, as they do in all but the most blustery weather. This duck hen, being of the "dabbling duck" variety, kept some evidence of
her exploration under the surface of the snow. All of the fowl, hens and ducks alike, were happy to play outside once the snow stopped falling. None had any issues with the fluffy white stuff, except for a couple of the smaller bantam hens who ended up bringing their still-unclipped wings into play after being "goosed" into untrod snow as the pecking order sorted itself out at the feeder.

After feeding and watering, I remembered that I needed to tighten up the twine that was securing one of the roost poles in place and after doing that, I turned to work my way back out of the poultry house. Boy, was I surprised!

I had thought that our two duck hens, after starting the season giving me an egg each per day, had for some reason backed off on productivity to give one each every other day, as they did when production was ending last fall. I had gone from finding two duck eggs each morning, and the chickens' offerings in the afternoon, to only one duck egg each morning. But as I prepared to leave the coop, a full nest in the most unlikely of places, caught my eye.

My poultry house is constructed of pallets, and the depth of the walls is that of a pallet -- the width of a 2x4. Not all pallets have equally spaced slats inside and out, but in between two slats, in the depth of a pallet, a duck had made a nest. In that particular location, she would have had to have squeezed through an opening not much more than 4" tall and then settled herself into a space no wider than that. There was a depression into the ground below the level of the pallet -- remnants of a former rat path I think -- into which the eggs had been laid or fallen, so the nest was almost as deep as it was wide. I had to really squeeze my hand to extract the eggs and one, that was mostly buried in the earth... well I was not sure I would ever get it out!

I did not have anything with which to block access, and thankfully the eggs were cold so the hen(s) had not yet gone broody, though I am hoping one or both will soon. I had the dregs of loose hay from having fed the sheep with me, so I made a nest of it inside the actual house, and left 6 eggs to encourage laying there, and hopefully broody behavior.

And just so you do remember what else I do, here is a pic of the latest hex sign, shipped to PA, a 4' diameter Protection sign. Now that the weather is warming, and I don't yet have a backlog, this would be a great time to order the sign you have been wishing for! http://www.DutchHexSign.com 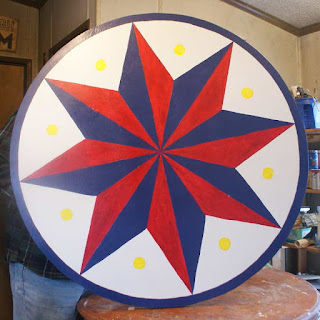 Posted by DutchHexSign at 5:02 PM No comments: