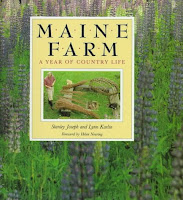 I just got a copy of Maine Farm - A Year of Country Life and started reading. A few bits in the first chapter resonated strongly with me: The first years I came close to failing. There was far too much work for a single person, or maybe even two people, to do. and "...everything seems to take much longer than we anticipate." And the observation that the Nearings "did not make it sound easy."  I will continue to read it, but to me it is a view of a microcosm in a microcosm and very much different from my experience and possibly that of very many small farmers here in Maine.

This book is NOT about homesteading, though the author espouses self-reliance, but rather seems to portray an idyllic look at the four seasons on an established, successful small commercial farm in coastal Maine. Thus far what I have read draws heavily on themes of the iconic quaint Maine seacoast. And being placed in a coastal climate, even in Maine, their experience is bound to be quite different from those in the larger part of Maine that is made up of the western mountains, the central highlands and the vast, still largely rural and agricultural "crown of Maine" aka The County.  Here, I see fewer picturesque villages and many more small towns struggling to stay marginally alive (to heck with having a marketable identity) in the face of population drift. Often they are, at most, now, bedroom communities for those who cannot afford to move and struggle with long commutes, or worse, unemployment.

They say that work on the farm takes up "most" of their time from spring through fall, even though they manage to round up help for major projects. My experience is that -- with or more often without help -- we are always way behind.

And then, they leave the farm in the winter! Farmers who take vacations?? The farmers I know struggle to be able to get enough time away to attend necessary family functions (weddings, graduations) and all of them have at least one family member working off farm for an additional income.

There are many benefits to the homestead/small farm lifestyle that they describe well. There are beauty, magic and miracles potentially around every corner, every day. Like today, when I took to my snow shoes for chores, thankful that I did not have to break trail *once again* on account of first falling, then massively drifting snow. The walk, pulling a sled full of feed and water behind as I made my way from pen to pen, was pleasant, no
arctic wind sucking the warmth from my thrice-gloved hands, no sun in my eyes, no rain or sleet seeking to soak my chore coat or hat. The sheep came along the fence, following me as always but carefully lifting their hooves and stepping through snow drifts nearly up to their bellies. No frolicing today, just careful treads to beg extra scratches and attention.

All of the fowl were out in their yard, as well, walking on the
area that had been shoveled and trod down by human and ducky feet, and making their way over the top of the drifted snow as well, leaving chicken tracks and trails as they tired to find their usual favorite spots -- now bluried under the mid-week snowfall. I stood for much longer than usual after feeding and watering them, just watching. There are three hens and a roo, hatched late last year at a friend's farm, who came to live with me as their mom was not terribly protective. Three are mostly white and one is mixed black and white. "Barnyard mix" they are, and they flock together within the larger crowd. There are three black Langshan hens, and a fourth that looks like them, but is a bit smaller though. She was hatched here and is another barnyard mix, with obviously one of the other three as her mother, though I was at one point gathering random eggs to put under a broody bantam hen. There is another rooster (in addition to "Old Roo," an elderly Rhode Island Red who is the senior chicken in the flock); the other "hatched here last year" success story. He is a beautiful, and very colorful feather-footed bantam that got the name Bullseye for his accuracy in pecking K's eye as a chick. He and his clutch mate, the smaller "Langshan" that we call Buckshot, used to hang together but of late Bullseye is often the first one out of the coop, the last one in and the chicken who wanders the farthest from the flock. I found great peace as I just stood and watched them this morning.

These times come, when you can slow your pace a bit and look for them. Sometimes they reach out and whack you 'long side the head, too, even when you are going gangbusters with hyper-focus
on a project.

So, as my word picture above shows, we do have idyllic moments. But if you read that book, don't think that's what life is like for most of us "back to the land" folks here in Maine. Even my best rose colored glasses can't change life that much.

Posted by DutchHexSign at 2:09 PM