April is often a strange month, neither winter nor spring here in the Northlands. It often feels like it takes hold of that strange day, which may have started when we changed the calendar so many eons ago and made the year start in January, and channels it all month long. Those "April showers" that are sung about as the precursor to May flowers... well they are as likely to be white as wet. When wet, as they were this week, they often don't feel like spring. They do contribute to mud season, though, and make puddles which seduce the sleepy farmer, attempting chores before the coffee has completely kicked in, into thinking the paths are muddy instead of brown skating rinks.

Regardless, the mostly rising temperatures and sunny days have been liberating the fields from their white blankets. When I hauled compost to the garden this week, it was in muck boots, with the wagon instead of snow boots and a sled. And the hens and ducks have begun laying in earnest. 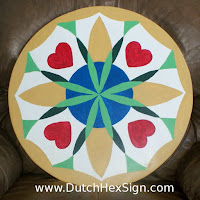 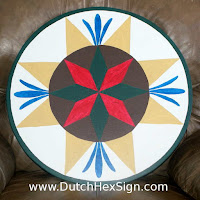 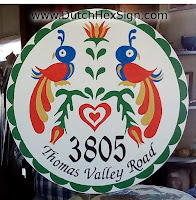 I started the week by shipping an order of three hex signs by UPS. I am still working to get things in order after the large sign was completed and out the door. Its place in the domestic chaos was taken by a new-to-me spinning wheel. 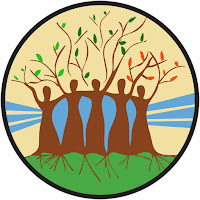 Between spinning, working on several knitting projects and getting the current crop of meat chicken babies in the house yesterday, it's been a busy week. The current hex project is the completing of a series of 5 small signs like this digital proof, for Strength Through Community (in this case, Sisterhood) for a client and her sisters.

Here's hoping that spring is, indeed around the corner. My calendar notes that I should be able to direct seed early crops like spinach and peas in a week or two.  I ain't holding my breath.

Posted by DutchHexSign at 6:42 AM