The Day Without Women -- looking ahead

Tomorrow is International Women's Day and here in the USA, many are calling for "a day without women, a protest to highlight "the enormous value that women of all backgrounds add to our socio-economic system—while receiving lower wages and experiencing greater inequities, vulnerability to discrimination, sexual harassment, and job insecurity.”

I no longer work for "the man," as we used to say. I am retired from that life, on a minimal pension which is at least partly because of lower wages due to being female. It is also (full disclosure here) because I chose to work only in jobs where I was able to wear clothing that was comfortable to me, thus eliminating the "hose, heels, power suits and makeup" drill required to rise in the work place, if you are female. I am not
putting blame on "the patriarchy" or even the common culture because, had I been male, I am honestly not sure I could have dealt with the suit, long sleeve shirt and tie wardrobe required of guys in the same arena.

Anyway, and regardless of all that I do still work. Anyone who knows me (and especially my massage therapist, who I will be seeing tomorrow -- more about that farther on) can attest to that. I am a folk artist and I WILL be going to the post office to ship off 2 pieces tomorrow. Yes, I could put that off, but to do so would require a special trip and I have been
prioritizing "living lightly on the Earth" for years. So I will ship off the work of my hands, wearing a red turtleneck shirt (for those who do not actually strike, wearing red in solidarity and support is encouraged) and my "pussy hat," symbolic of the Women's March.

And before that, I will tend the critters on my subsistence farm. Could I ask my partner to do that? Yes. Would he? In an instant DESPITE the fact that he really should not because when he was carrying water to the goats this morning, he fell hard and flat on his back and is currently under concussion watch. And it will be no less icy tomorrow, with rain on top of it. So, no, I will not put another human, or the critters, at risk for this.

What I will do is take my poor, old, working-class self to a woman-owned, woman-run business (Carpe Diem Salon in Dover-Foxcroft where my friend, Melissa Veraldo, will work her massage and energy medicine magic to put me back together again (after 6 weeks of hard work, snow shoveling and a good ol' Maine winter.) Missy won't be striking either. Why? Like many families, hers depends right now on her income while her wonderful hubby does battle with cancer.  I am happy to be one of her clients all the time, and especially happy to be able to support her tomorrow.

We're kinda in the backwoods of Maine, but I will be keeping a lookout for a group of women standing or walking their strike and if I see any, you can be sure I will join them for a bit. Because the issues are valid ones, and maybe even more so for those who are less privileged than I; for those who hold more than one job and still can't quite make ends meet; for those caught in positions where they dare not complain but cannot quit. 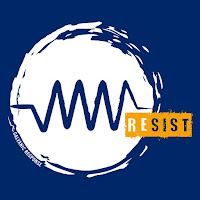 We, all of us, must do what we can, when we can and where we can -- for those who can't and most need to.
Posted by DutchHexSign at 5:20 PM

Email ThisBlogThis!Share to TwitterShare to FacebookShare to Pinterest
Labels: Day Without Women

This winter I became A Knitter

I am declaring this winter to be The Winter I Became A Knitter. Decided this last night, as I picked up my third WIP (that's "Work In Progress" for those of you who don't speak knitting acronyms any better than I do).

I learned to knit as a girl, from my grandmother. I knit my way through 6th grade, thanks to an understanding teacher, who knew I was a quick study and only knit when my work was done. Other students wanted to know why I was knitting and they were not, and she told them that any time they got their work done early, they could knit. My best friend, Connie, joined me from time to time. I was knitting a sweater for my dog, Mitzi, a Boston Terrier who -- in Michigan -- appreciated the extra insulation.

Picked it up again as a mom of several kids, who all got wool mittens. Yeah, I went from two needles to double pointed (DPN in knit speak), just like that. Thumbs, no sweat. Blue ribbon in the fair even.

But I got back into spinning and hanging with knitters so...

I picked it up again. I have a young friend who likes to knit socks and I like socks, so that was my project of choice. Circular needles this time (dunno the knit speak for them). Ended up with a sock-like object (right shape, right length, VERY wrong diameter). One not two. Friend Beverly, a knitting guru, talked about knitting two at a time, from the toe up. "Not a beginner technique" she said, but she
was willing to hold my hand and agreed to teach me. That was last winter. This autumn I finished them. They were socks and they fit.

Meanwhile I had been spinning Elenor's wool. Elenor is an Icelandic sheep, part of the University of Maine flock. Love her wool...had enough spun to start a sweater, so I did. Circular needles... somewhat larger... wooden, like the ones from the socks. I found I love wooden and bamboo needles.

Then I decided that I needed a "pussy hat" after having attended the Women's March in Augusta, so I picked up an inexpensive set of regular bamboo needles and knit one. Yes, I finished a project... in a month or so rather than a year or so.

And it fits. And I wear it, pink and all. Made it with Peace Fleece yarn from One Lupine in Bangor, ME.

But winter will not last forever, not even in Maine, so I decided I needed a cotton pussy hat, picked up some commercial cotton yarn and started it. Along with the sweater. Two knitting projects at the same time.

Then I decided I would attend a local March for Science in April and found someone had designed a pattern for a hat for that march. It has "color work" with a pattern that shows resistors and a battery. After fussing with test swatches for gauge, I got a set of interchangeable circular needles from my daughter and set to work.

Then a friend gifted me with a bucket full of T-shirt yarn, and I had the wild idea to try to knit a small rug. Grabbed some old size 13 Boye metal needles, cast on and away I went.

The gifted needles included both a very smooth shiny metal and  wooden ends, two length cables and such from Knit Picks. I started on the metal, changed to the one size smaller wooden, as the metal was SO slippery... much more so than my Boye metal needles. And the wood was slippery too... much more so than the wooden double pointed ones, brand forgotten. All of them have a bit of friction, as does the bamboo. Right now I am knitting with all of them and trying to decide if I have a favorite. Or if the needle material, for me, needs to vary with project, fiber or phase of the moon.


Posted by DutchHexSign at 4:38 PM