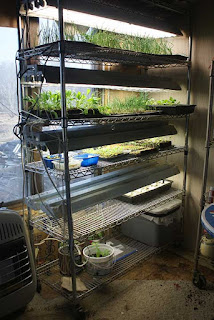 We have not started to see greening outside yet, here around my central Maine farm, though the sap buckets are no longer hanging on the maple trees that I passed on my way to my local post office this morning. If you don't live in an area where folks "sugar," let me say that is one sure sign that late winter has given way to early spring. Catching the sugar maple sap to boil down into maple syrup is dependent on the rise and fall of the sap as warmer days revert to cold nights. The trees are trying to start their engines, but once they are awake and running -- even though they have not yet pushed out the buds that signify spring to most of us -- the wheel of the year as rolled one more bit along its cycle. 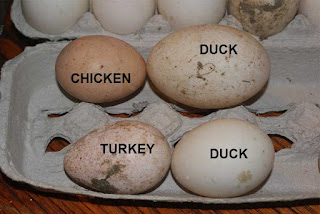 Here at Fussing Duck farm we don't sugar, and mark the changing seasons with the arrival of eggs.  Usually our hens take their natural vacation during the time of longest nights; we do not add lighting nor heat to allow them their rest from laying. This past winter, though, our young layers who started in the fall continued all winter long. Around the beginning of the month, the ducks began to lay and more recently the young hen turkey has presented us with a few eggs. I think that the large duck egg, upper right, must be a "double yolker"... something that is not terribly uncommon in the hens' offerings (we get several each laying season) but this is the first I have ever seen from a duck!

Starting around Imbolc/Ground Hog Day (what I call "Spring Finding) in early February, I begin cleaning off the grow rack (a baker's rack in its more typical setting) to start seedlings of onions and leeks. Later, lettuce joins the mix along with cabbages and kale, broccoli and cauliflower and finally, just this week, the tomatoes and peppers met their little soil blocks.
So while there is no new growth showing outside, these babies hold the promise of much good food in the coming months!
Posted by DutchHexSign at 5:31 PM

How do YOU get ALL the homestead things done?

I am thinking of offering a workshop by that title at the Common Ground Fair this fall. So the topic is on my mind a lot. My short answer is "you don't." I didn't when I was homesteading as a young newly married women, nor as a mother ( of one... or many) and I don't now, as a crone with a disabled (and currently ailing) partner.

I doubt if I am the only one to have a weeks worth of work on my daily "to do" list.

Take today, for example. My list looked like this:
What was NOT on the list was: take Tractor Guy to the doc. He has had debilitating pain from neck down the left arm to the hand, in various places off and on for several days (to be honest, it's been ON more than OFF and not responding to much for long.

That is the way it goes; there is always SOMETHING to be added. An emergency trip to town (2 hrs minimum), busted fences or pipes... something.

And there are always things that don't get done. The turkeys' roost is done, the birds moved. ducks were culled, though not yet ready for being made into jerky. Laundry all got out AND back in. Won't be put away until tomorrow. Dishes are washed and dry on the counter. Hopefully Tractor Guy will be up to putting them away tomorrow, otherwise that will get added to tomorrow's list.

The extra tom is still here but at least I don't have to drive 2 hours (one way) to deliver him. The buyers will be here tomorrow to claim him. This is the result of a mistake a couple of days ago when they were here to buy him and he quickly sidestepped and in the chaos, we did not realize he had let his twin sister (there are a pair of black turkeys and a pair of others with lighter color markings both from the last hatch of 2015) take the fall. The folks want to keep her and acquire him as well, and were going to come pick him up this evening but their day got away from them too (see what I mean about everyone's lists being too long?) so their request to pick him up tomorrow was just fine with me!

But that still leaves over half of the list items undone.
Posted by DutchHexSign at 8:37 PM

A Gift Well Given

Yule and Christmas are long past and I suspect that many of us have finally relaxed from the hubub and stress of the 'gifting season.' For some, the stress comes from the financial aspect... having many people to "buy for" as folks say; for others, whose gift list includes friends and family who appreciate the loving touch of hand made gifts, there is the stress of "can I get it done in time." Some folks take gift giving (as I think it should be) as a personal and heart-felt offering -- be it hand made and home spun or thoughtfully selected in the shops. Sometimes (not too often for me, unfortunately) an item leaps out of the background of crafting solutions or stock on the shelves of a store and says "So-and-So MUST have me!" and if I have the funds or time required, I always oblige.

Obligatory gift giving has always frustrated me and I hate occasions where a gift is required and nothing especially suitable to the recipient presents itself... whether it's because the intended recipient is not someone I know well (like a work colleague at a company where a small gift exchange is expected) or is someone I do not feel like I know very well any longer (such as a family member who lives at a distance.) One can always (in my mind) "cop out" with a gift card or the old standard... money... but that has always seemed, well, impersonal and, yes, a cop out.

Until this holiday season.

I received a card from my kids. I had heard via FaceBook, that "something" was on the way. In the past they have presented me with a delightful selection of gifts... a ceramic mobile with shared values inscribed on the hanging bits, a set of mix-match melmac dishes (in remembrance, I suspect, of the "set" I got when they were young, in hopes to mitigate the "that wasn't MY bowl..." issue), etc. All well thought out and meaningful and used or displayed, as is appropriate, and well loved in my home. I know they, like I, put a lot of thought into gifts.

This year it was even more obvious.

My gift was cash. Now, that probably has you scratching your head. Yes, I do sometimes have cash flow problems (don't we all?) but this was not a lottery-winning amount of cash. It was a holiday gift to your mom amount of cash, but the note that came with it was the clincher.

My girls noted that they (like I, and many of my friends, it seems) had been sorting through and pruning their "stuff." I use the common term "de-junking" but that is really a misnomer, for what I -- and I assume they -- are sending on is, at least mostly, not in any way junk. For myself (the only person for whom I can accurately speak) the stuff that is getting sent on its way WAS at one time necessary, useful and used. But change happens and things that were essential in the past may not continue to be so forever.

Now, some things have sentimental value and last in that regard much longer than they prove physically useful. Those first baby booties or shoes, for example, that many of us save... the kid's first drawings.. which get stashed away in boxes and in attics... well maybe their purpose is served later when we encounter them when -- just days before -- we were considering the legal and moral implications of stuffing the kid into a barrel, nailing down the lid and feeding them through the bunghole until they grew up. LOL   But eventually the kids DO grow up and have kids of their own or at least move out on their own and we, some time along the way, ship them a box of stuff and they mull it over and wonder "why the heck did she save THAT!" But at least then it's THEIR problem then.

But my kids, with their sorting of stuff, talked and discovered that they "probably got that from me" and decided this year not to gift me with more stuff, or so they wrote, but with bucks to do something that will give me joy without adding to the "burden" of owning more stuff. They have been enjoying the feeling of becoming more free as their piles of stuff get smaller.

In this materialistic age... just wow! And even (my cynical side rearing its ugly head) if the germ of this was that nothing jumped out at them and said "I need to go to your mom" and time was a-wasting and they had to do SOMETHING...

And, strangely enough, I will likely spend my Yule present on... STUFF!  LOL  While we still use the dishes from a few holidays back on a regular basis, a set of 4 doesn't last long in a house with a "long term variable periodic housekeeper" at the helm. And the previous set of breakable dishes has mostly done just that, so more often than I would like to admit, come around lunch time... a day or so down a busy week... we are scrounging for something to hold a sandwich or soup.

Not long ago I spied some wonderfully colorful mix/match china dishes on a display at WalMart. Turns out they are an offering by "Pioneer Woman" ( yea, a shameless commercialization of her lifestyle...why didn't I think of that! LOL) but I really like them and have been wanting to get some "back up dishes." I like that these are available both in sets (some are real sets, some are mixed sets) and singly and that the colors seem to be ones that would go with Fiestaware (which is a long running open stock brand) when they start to fail.

So, the best of both worlds, I think.
Posted by DutchHexSign at 7:52 PM