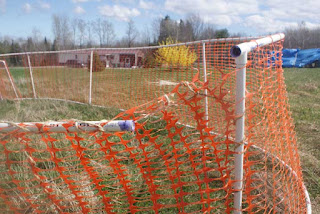 You may remember my writing about the difficulty securing the final connections of the rails on this first prototype of the poultry pen. There was just barely enough flex in the 6, 10 lengths of pipe, to complete a circle. We fought, lost, fought, lost and eventually managed to secure the bottom rail, which was the one giving us the most trouble. We thought...

The top rail seemed to secure and stay. At least it showed no desire to come apart during all the wrestling with it's bottom companion. However, as you can see, it failed. The pipe did not break, and a close look at the end of the pipe and the inside of the T, shows that we did indeed get the two parts well coated with cement and pushed completely together. The pen DID blow about at bit (wind gusts upwards of 30 mph!) and it appears that these things will need to be secured to the ground somehow to deal with our frequent high winds.

I will re-do this connection in a day or so, but I am not going to fight to connect the pen in a circle again. Instead, taking stock of the situation for V2.0, I decided to use 45 degree elbows, closely paired with Ts, to make an 8-sided pen with 10' sides. When I bought that material today, I secured two additional 45 degree elbows and I will cut both top and bottom rails, allowing a few inches of pipe between the T and the elbow. On top, here, I will have to cut a short section of the pipe and re-attach at the T; on the bottom, I will merely need to make a cut the same distance from the secure T connection before grafting in the elbows. This will make a teardrop shaped pen, and I am hoping that it will alleviate the excess stress on these connections.  In any case, we will see.

I still hope to get the ducks in this pen in the next day or so, and the pen made for the chickens complete and populated by this weekend, so I can PLANT!

Posted by DutchHexSign at 4:28 PM

This is the first draft version of a lightweight, portable enclosure for poultry. It is made from 6 10-foot sections of 3/4" schedule 40 PVC pipe and 4' plastic storm fence.

It is lightweight enough to be easily dragged about by one person, does not appear (to this point at least) to be susceptible to being blown about by the winds, which we have here quite often and quite vigorously. It seems to flex enough to deal with the not-quite-flat terrain, though I have to watch the perimeter to avoid setting it on depressions previously made by hens "dusting" in areas they had picked clean, that have subsequently grassed over. We will be putting the ducks in shortly and I'll post pix of them in their new home. Following though, are detail pictures, a parts and price list (as of April 2012 in Bangor, Maine) and discussion of the construction, for those who might like to fabricate something similar.

We will be building other similar pens, but I will redesign for future constructions, as the pipe was not QUITE flexible enough to make easy work of securing the final joints to complete the circles.

Parts List
TOTAL $91.34 with fence and Primer/cement and odd bits of pipe left over...
I assembled the vertical pieces first, then attached them to the top and bottom rails. The pipe was woven into the fence material as the structure was assembled. I planned ahead to make the final connections of rails opposite the gate area, as experience "trial fitting" one set of rails and Ts had shown me that 60 feet of pipe was barely flexible enough to make a circle, and I wanted the most flex I could get on the sections I was planning to join. To make the gate area, I cut 3' sections off of two of the 10' pipes to add an extra vertical member for the gate to close against.

I worked as much as I could in the garage, pulling the snow fence material out along the driveway, weaving the top and bottom rails in and out through the mesh and then weaving in the vertical supports, with the Ts attached and cementing them in place. As each section was completed, I pulled it out, deploying more fence material, weaving in another set of rails, securing them to the T's and so on.

Each vertical was cut 44 inches and a T connector attached to each end.

NOTE: I determined this length by weaving top and bottom rails into the fence, stretching the fence fairly tightly between the two and measuring. I then put a T on one end, trial fit it to one rail and checked my measurement. The T fittings allow 1" of pipe to enter when cementing, so figure that into your measurements. DO CHECK as the snow fence is not exactly a tight tolerance part.

IT IS VERY IMPORTANT that the T connectors be in the same orientation on the vertical members, and not cocked to one side or another, which would cause your top and bottom rail to head off in different directions. After securing the first T in place and allowing a moment for it to set, trial fit the second T. I laid my vertical with the two Ts attached on the cement floor of the garage and adjusted the second T until the entire piece laid nicely flat against the floor. Then I drew a reference mark down one side of the T, and continued it an inch or so down the pipe. After knocking the second T off and applying the purple cleaner and cement, I wiggled the T back on, carefully lining up the mark on the T and the pipe. Don't fret if you find it hard to trial fit the parts, or if you have trouble taking them apart. I used a rubber mallet to get them to separate, as well as to make sure the T's were completely pushed onto the vertical members. You will discover that after applying the "goop" it is much easier to push the pipe and connector together. Work quickly, but accurately and make sure that they are properly mated and held in place for a few moments for the cement to begin to set. Otherwise, you may see your connector pushed off the pipe by the bonding reaction! After I had 3 long pipe sections assembled with 3 vertical supports, I wove in the 7' top and bottom rails (remember, I had cut 3' sections off for the gate!) added a vertical, wove in the 3' sections, added another vertical and then continued on with 10' sections.

After cutting the extra orange fence off, I allowed the whole construction to cure overnight, pulled out across the lawn. You will notice that I allowed a bit of extra fencing (on each end, though you cannot see this on the far end...) beyond the end of the structure.

The hard part was connecting the circles! As I said, the 60' structure was barely flexible enough. We stood the fence up, tied one end to a porch railing and walked the other end around in a circle until they were close enough to mate. One rail went together nicely. The bottom one fought back and it took multiple tries to get the pipe and T properly mated and securely together. It is VERY important at this juncture to hold the joint together quite a long time, or otherwise secure it until it is cured. After finally getting the thing together, we let it sit a couple of days, well secured, to cure. While waiting for it to cure I made the gate... just under 44" tall and 36" wide. I used to straight connector to make two of the scraps into a longer section to save on pipe, cut and assembled. Here, again, it is important to make sure all the elbows are properly aligned to make a flat rectangle. I used the same "trial fit, lay on the cement, adjust, mark, assemble" as with the Ts.


When it came time to install the gate, I cut out the gate hole, but I left a least one row of the fence mesh protruding into the gate area to serve as a visual barrier because the gate will not fit exactly and close tightly.


You can see a bit of that in this picture of the gate area, left.


At this point, I used a bit of clothesline rope as a hinge, and tried to secure the top "hinge" in such a way as to hang the gate. The bottom of the gate was just tied, and it will be secured closed, top and bottom, with bungees.


I used some scrounged bailing twine to weave the overlapping sections of fence at the area where the joints were made to complete the structure.
Posted by DutchHexSign at 2:38 PM