can we say "disorganized?"

I just learned today that the "artwalk" sales event is being moved from the waterfront street to a park in downdown Morehead City, AND that instead of assigned places, it will be "first come, first serve" for set up starting 3 pm tomorrow... so you can see what my mid-afternoon will be.

I think this is where the event SHOULD have been to start with, but on the other hand, they did managed to get a good promo piece in the paper last night that said, quite clearly, it was located on the waterfront! That is the type of organization that has plagued this event from the get-go, sorry to say. They are also supposed to have entertainment (musicians... ) this weekend, which the promo stuff said would be happening last weekend, too. We'll see...

So we will have "hex in the park". I am hoping my "practice safe hex" bumper sticker will arrive soon, too!
Posted by DutchHexSign at 8:51 AM No comments: 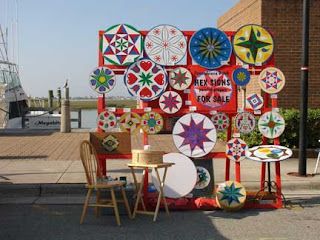 Well it traveled well, set up like a dream and when time came to haul the goodies home overnight (security being iffy...) it came down easier than it went up.

That being said, what I got out of today was a long day of sitting in the sun (albeit on the Morehead City waterfront) painting hex signs in the hot sun (and rain... but that was just for half an hour and most of that time I didn't even stop painting.) No sales, no nibbles even.

and the issues were compounded by the lack of organization/communication/OTHER events to draw and keep people in town. Attendance was sparse and most of the overheard conversations were about "what else was happening" as they didn't know (actually... nothing... but the Beaufort Music Festival here in my current home town!

I will go back tomorrow afternoon and next weekend, though. Even though y'all pretty much know, by now, my feelings about the season of Old Brazen Face here in the south, things could be worse than spending a day outside, painting. Even if I DID have trouble keeping the paint from drying in the palettte before I got it on the hex! LOL

This was, in one way, a very unusual day. I found not one, not two, but THREE "lucky" pennies! Two were on the ground near where I parked Artie in the vendors' parking area. One was on the ground in my next-door-neighbor's booth. I of course gave it to her, over her protests that I had found it. It was in HER booth, after all!

I find myself wishing that I had been able to come home to a quiet, empty house (except for the pup, of course, who would have been doubly glad to see me and crossing all 4 legs). I ended up cooking supper, as K was having a bad day (not that putting the boil on a mess of shrimp and cutting salad fixings and throwing them in a bowl is a tough chore) but after spending all day "on" I just want solitude to veg.

Those of you to whom I owe emails will just have to wait a couple of days.
Posted by DutchHexSign at 7:36 PM No comments:


Posted by DutchHexSign at 6:17 PM No comments: 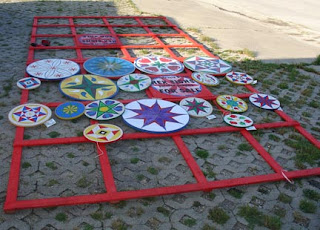 It's been a LONG time since I had a booth an a festival type event... since back in the 70s when I did batik.

Boy I have a ton to do... and work (regular work -- my "9-5" as art director and lead designer for Vision IPD) isn't slowing down. However I am beginning to remember the "festival high" that I used to get leading up to the event... when in the "old days" I would be sewing like a madwoman, putting together John and Martha batik dolls to stuff. Sewed my finger then, too.

Now it's just a matter of putting temp. hangers on the back of the large wooden outside hex signs (the only screws I could find are the dreaded SLOT HEAD so I am waiting for my evening glass of wine to mellow a bit before I attack that job), doing printing related stuff (business cards, brochures, informational attachments for my display) and making sure I have stuff to paint, eat and drink while at my booth. And sunscreen.

I would have like to have had enough designs to fill BOTH sides of my display, but I think this will do for now.
Posted by DutchHexSign at 5:59 PM No comments: