So many projects, so little time!

Now that spring has finally arrived (with unfortunate hints of summer already...) we are both pushing to the limits.

Tractor Guy got Fergie back into running order, with her hydraulic hose replaced and her flat front tire taken to the nearby garage to have an inner tube installed.  Good thing, because making furrows into the untilled-since-last-spring ground was highly problematical. I did a row for the carrots and beets, swinging the hoe like it was a mattock. Put Tractor guy to work making the furrow for the peas. His choice was to use the Wheel Hoe, which resulted in it getting some repair work done, as the plow blade just would not stay put. But the row is done and the seeds soaked and in the ground. Ditto for the spinach. I finally got the catch pan cleaned out from under Rufus Rabbit -- it has been far too long -- and hand dug and then manured, re-dug and planted the seed. Hoping the rain this weekend will be in time as we have not been able to find the soaker hoses yet. Grrrr.

I did finally complete the three small hexen I have been working on: two custom indoor signs and a small Abundance, Prosperity and Smooth Sailing through Life.


I also received photos from one of my customers, showing the large signs he recently orders as they are displayed on his metal building! 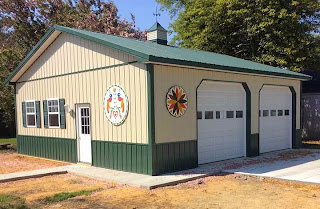 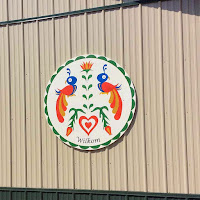 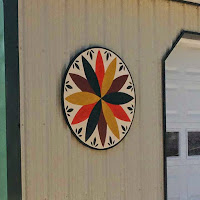 The 36" Blessed Year sign, right and the 48" Welcome ("Wilkom") sign, left, are hanging in Delaware. The customer has recently ordered yet another sign! Yay for repeat business!!

I am currently painting on a 36" Heart Chakra sign and have a 30" Might Oak waiting in the wings. It is wonderful to have weather that is amenable to sanding and painting the primer and background coats outdoors!

Other farm projects recently have included getting the 75 new strawberry plants in the ground and getting the strawberry and bush berry (cranberry and blueberry) areas re-covered with cardboard as needed and mulched with some of the mulch hay from the 4 big round bales we hauled last week. It was pretty much one bale to an Artie-load but well worth it. I was able to roll out a bale and pull off
sheets of hay to place around the strawberries and with the help of Tractor guy, roll the bales along next to and between the berry bushes to have them lay down a blanket as they went. It was good to have his help in the berry bush area with the cardboard, too! While I love the almost-constant winds as a bug repellant, it makes it hard to keep large sheets of cardboard in place while you work. With one of us to place the stuff and one to stand on it to hold it down, it pretty much stayed put. Hopefully this will keep the weeds down and the moisture in and the two layer approach definitely has a nicer visual appearance than just the cardboard.

TG also got a confinement pen put together for the 6 young layers and they went outside this week.  They are in a small pen, inside the chicken pen as they are still too small for the general population. Moose, our guardian dog pup, was QUITE confused at first by the new stuff and new critters but thankfully settled down before the day was done.

"The Hussy," our hen who seems to want to flee the coop each year, and Lady Grey, the hen turkey, are both hard at work sitting on eggs. Mama duck seems to think she
is broody too... and started out sitting on the turkey eggs but it seems LG got the idea and took over, so now the hen duck is just setting on an empty nest in the turkey pen. I hope to connect with a few more Khaki Campbell hens before long, so I can put our lone hen back with the ducks. Two drakes and one hen is NOT a good mix.  Fred, the single turkey from last year's hatch that survived the wild raiders, has taken up position outside the poultry fence, along with "The Looster," our spare roo. Fred seems to roost at night on the fence or the top of the hen house and so far has survived just fine. I cannot even think about putting him in the freezer at present, as there is literally no space.

I went last Sunday to help friends process their boar, who had become intractable. Apparently he chased the farmer around a tree a day before, as the final straw to his having gotten more attitude than necessary. I often help them on pig day as a meat cutter, but this was the first time we had done such a big beast! I was told he weighed 700 pounds after they gutted him and removed his huge head. Even the hide, which I was lucky enough to be able to help remove, was too heavy for just one person to move! The pieces of pork are huge and between filling my friends' freezers to capacity, and mine, they had more meat to share with the folks who helped with the killing part. Even that had to be delivered the same evening as the project, as there was no place cool left to store it until the morning. Processing meat in the spring is not optimal, but neither is not being able to mend fences because of a mean animal. I bought an 8 quart crock pot this week, in hopes of being able to cook the larger pieces of pork and still have fat in the refrigerator to render down. Hopefully I can get that into a roaster pan in the oven today; the temperature is supposed to stay cooler and having the extra heat will not be a burden.

And that's life in the slow lane...

Posted by DutchHexSign at 4:17 PM